Two of our Trustees have written these comprehensive books on churches in Wiltshire and elsewhere that are reviewed below and which are offered for sale. The book on Wiltshire Non Conformist Chapels and Meeting Houses is available to order online through several companies.

Parish Churches of Wiltshire: A Guide

A detailed description of Wiltshire churches can be found in “Parish Churches of Wiltshire: A Guide” by Brian Woodruffe (Wiltshire Historic Churches Trust 2010).

This is the first comprehensive guide to churches in Wiltshire. It will encourage many people to explore not only the nationally significant churches but also the smaller and less obvious places of worship that are tucked away and easily by-passed.

It consists of 206 pages with 12 chapters, each centred on a different region of Wiltshire. Over 300 churches are covered. It is illustrated with more than 700 colour photographs and drawings. The Foreword is by Lord Brooke of Sutton Mandeville, former President of the Friends of Wiltshire Churches.

The Church Monuments of Wiltshire

This booklet is the first comprehensive photographic guide to the church monuments of Wiltshire covering both those in Salisbury Cathedral and those in parish churches throughout the county. It traces their history from various unknown Anglo-Saxon tombs in Ramsbury to that of Nikolaus Pevsner in Clyffe Pypard churchyard.

Salisbury Cathedral has a large collection of the tombs of medieval bishops. Effigies of medieval knights can be found there and elsewhere in the county. The first evidence of the Renaissance is evident on the tomb of the 1st Lord Stourton at Stourton in 1536, and this new style was then further developed for later 16th century tombs at Lacock (Sir William Sharington) and Ludgershall (Sir Richard Brydges). The 17th century saw a considerable number of “swagger” tombs at Lydiard Tregoze (the St Johns) and elsewhere.

Explore The Church Monuments of Wiltshire 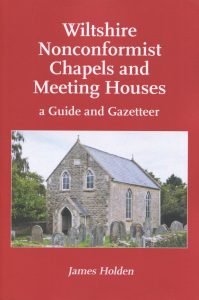 Wiltshire is particularly lucky in the variety and quality of its chapels, which range from tiny country meeting houses of traditional gable-ended design to large town churches with Classical facades and space for 1000 or more worshippers in their galleried interiors.

This book documents them. Introductory chapters describe the development of nonconformity in the county and the way chapel design has evolved in the three centuries since the first were built. These are followed by a gazetteer describing each of the almost 500 chapels still standing, with details of their appearance and history. With over 250 photographs in addition to the authoritative text, this book provides the definitive guide to the history and design of these fascinating buildings.

This book can be purchased online from several companies for £20

This book is the first comprehensive guide to the possessions of the Knights Hospitaller in the British Isles in 1540 at the time of their dissolution by Henry VIII. They were in 1540 the largest individual owner of land after the Crown.

The Knights Hospitaller were founded in the Holy Land in the 11th century as the Knights of St John of Jerusalem. Initially set up to look after the poor and the sick, they rapidly became a military order, building castles such as Krak des Chevaliers. After the end of the Latin Kingdom of Jerusalem in 1291 they moved to Rhodes until evicted by the Turks in 1522. They moved their headquarters to Malta in 1531. They arguably saved Christian Europe from Turkish invasion at the time of the Great Siege of 1565. Evicted from Malta in 1798 by Napoleon they ultimately moved to Rome where they continue to function to this day as the Order of Malta.

In the Middle Ages the funds for the defence of the Holy Land and then Rhodes came from their huge, donated, possessions in Western Europe. In 1312 the Knights Templar were dissolved and the Knights Hospitaller were in the main given their lands, thereby roughly doubling their wealth. In 1540 the Knights Hospitallers in the British Isles had some forty “commanderies” through which they administered their possessions. They also had the advowsons of well over 200 churches.

Parish Churches of London: A Guide

Published in December 2015, this book is the first comprehensive guide to the Anglican and catholic churches (outside the well-covered City of London) of Greater London.

It will encourage people to explore not only the better known churches, for instance of Kensington & Chelsea and Westminster, but also those lesser known gems of Camden, Croydon, Hackney, Tower Hamlets, etc.

The book covers each London borough in alphabetical order, with a brief introduction to its history, followed by a chronological gazetteer of first Anglican and then Catholic churches from the Middle Ages to the 20th century. It includes details on church architects, architecture, furnishings, monuments, stained glass, etc for over 420 churches.

Michael Hodges studied at Eton College and Balliol College, Oxford, before spending forty years as a banker focusing on the Middle East. He is a Fellow of the Society of Antiquaries, a Deputy Lieutenant of Wiltshire and a trustee of the Wiltshire Historic Churches Trust.

Illustrated with more than 1340 colour photographs. Foreword by HRH The Duke of Gloucester KG, GCVO, Patron of The Heritage of London Trust.