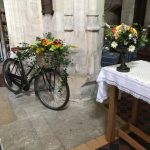 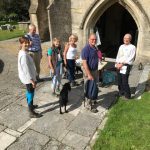 “There’s nothing quite like Ride+Stride
To get the pedals spinning round,
Down leafy lanes and busy roads
To visit plots of holy ground.”

This opening verse of a ditty penned this year by Rev John Martin from Cricklade captures something of the significance of Ride+Stride for many who like him have been riding and striding for 30 years or more.

It may have been a disappointing year as far as numbers are concerned (around 25% fewer churches taking part, and the majority of church doors firmly locked), but for those who did ride or stride it was an enjoyable day helped by favourable weather.

Once again the Bratton team led the way, fielding 36 cyclists and walkers, aged between 2 and 88, and winning the Brooke Cup for the 10th year in succession.

The Junior Cup was won for the first time by St Mary’s and Holy Trinity, Calne, thanks to an impressive ride by the Cook brothers (“40 miles, 22 churches, 6 rolls, 3 ice creams, 2 minor crashes, 8 bottles of water, no punctures”).

Lord Brooke’s generosity enabled us to give all the under 16 year-olds a small prize, and we hope that this will encourage them and others to get pedalling next year.

Included amongst the best adult achievers were David Fishlock (Mildenhall), who raised £2248, Andy Miller (Calne) who notched up 66 churches, and David Ferguson (Durrington) who rode 84 miles.

Some 27 churches raised over £600. A few, where there was no-one able to take part, kindly sent in a donation.  Once Gift Aid has been claimed, the total amount raised should come to over £44,000 – making a valuable contribution to WHCT funds in a year when most other fund-raising events had to be cancelled.  So a big thank you to all who contributed in any way.

Other parishes raising more than £600: